The Dalai Lama’s 6 Key Tips to Happiness. – The Lotus Form Skip to content 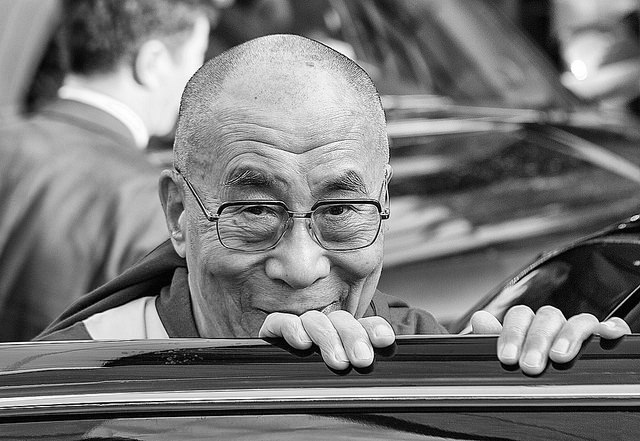 “I believe that the very purpose of our life is to seek happiness.” ~ The Dalai Lama

I have also seen several short films about him. If there’s one thing that I can say about the Dalai Lama it’s that he’s a happy man. Despite all the problems that his people and country are going through, he still looks for the light at the end of the tunnel.

Tenzin Gyatso is the spiritual leader of the Tibetan people. He was exiled from Tibet—his homeland—in 1959 and has been living in Dharamshala, India, ever since. During his exile, he has written a lot about how to achieve happiness.

I’m convinced we can learn a lot from him if we follow the methods that he has applied to his own life. Below are his six key tips for happiness:

“Happiness is not something ready made. It comes from your own actions.” ~ The Dalai Lama

The Dalai Lama suggests that when we’re honest, we are likely to suffer less from anxiety and fear. If we remain true to ourselves—and to others—we will experience genuine happiness. Through integrity and honesty, we also create a peaceful environment.

Oftentimes, truthfulness is challenging to practice, especially when there are other people involved. Through being honest, I’ve realized that telling the truth is always less hurtful than hiding the facts.

2. Rise above anger and hatred.

“Anger is the ultimate destroyer of your own peace of mind.” ~ The Dalai Lama

The Dalai Lama explains that we often feel like victims, and we need someone or something to point the finger at. He also says that we feed most of our anger through dwelling mentally on situations and refusing to forgive others.

The Dalai Lama’s advice on eradicating anger is to meditate on it. We must first identify our anger and understand its nature. Then, we quell it and let it go, once we understand that it’s futile and doesn’t solve any problem. The way to rise above anger is through being compassionate and loving.

“The true hero is one who conquers his own anger and hatred.” ~ The Dalai Lama

According to the Dalai Lama, negativity breeds isolation, loneliness, and fear. Hatred, greed, envy, aversion, and anger are all negative thoughts that we often experience. If we want to achieve perfect happiness, the Dalai suggests to eliminate mischievous thoughts from our minds and replace them with positive thoughts.

Whenever negative thoughts arise, it’s valuable to focus on the breath and return to the present moment, instead of feeding the thought. Remember, negativity produces more negativity.

“Our prime purpose in this life is to help others. And if you can’t help them, at least don’t hurt them.” ~ The Dalai Lama

To achieve happiness, we need to cultivate the thought that others are valuable. The Dalai Lama ascertains that other people are the source of our happiness. The more caring we are toward them, the more satisfied and happy we will be. However, when we only think of ourselves, our minds become narrow—but when we think of others, our minds expand.

Empathy is essential for our happiness, and we should practice it more often. Notice the energy that flows through your body when you’re good to someone else. This is what happiness feels like.

5. Get in touch with your spiritual nature.

The Dalai Lama insists on the importance of walking down a spiritual path. Some people achieve spirituality through religion, others through personal experience. It doesn’t matter what path we choose, as long as it helps us to find our true nature.

Spirituality aids us in achieving happiness. Through getting in touch with our spiritual side, we discover that the greatest happiness lies within ourselves, and not through transitory physical means.

“Choose to be optimistic; it feels better.” ~ The Dalai Lama

His Holiness asks us to look at our life’s situations from all angles, because there’s a good thing hiding somewhere. The Dalai Lama says that instead of dwelling on the negative, we should learn from it and extract from it the good.

This is what the Dalai Lama does when he comes to Tibet. He explains that he doesn’t look at the situation from a narrow perspective—or else, it would appear hopeless. He realizes that things could have been worse. The Dalai Lama chooses to look at the lotus, not the mud.