Unlocking the Secrets of the Tibetan Book of the Dead

I have been initiated into the secret ‘Highest Yoga Tantra’ tradition of Tibetan Buddhism where I swore never to reveal the secrets they shared with me but here I go again, as I did in Revealing the Secrets of Inner Fire Meditation as well, I am sharing this information with the public. I am breaking my vows of secrecy because this information is freely available everywhere on the internet through books by Tibetan lamas and other western teachers, also this information is not about someone else, I am not gossiping here, it is about you and perhaps one of the most universal subjects for humans; death.

The Tibetan Book of the Dead‘s author is Padmasambhava; the founder of Tibetan Buddhism in the 8th century when he brought the Buddhist teachings from India and introduced them and established the teachings into Tibet. Padmasambhava was not a traditional Buddhist he also brought with him a lot of esoteric tantric teachings from other traditions and now Tibetan Buddhism as we now know it is a mixture of traditional Buddhism, Hindu tantric teachings and the Bon tradition which was native to Tibet at the time.

The white light at death has been commonly reported from people who have had near death experiences and have lived to tell their story. Some common factors are a tunnel like vision, feelings of deep peace and even bliss and also a sense of coming home to something familiar. Science struggles to explain such phenomena but explains these things as massive impulses of electricity at the time of death, but science finds it more difficult to explain the out of body experiences where patients have clearly retold of doctors conversations during the time when they were declared dead or even when the patients recounts the experiences of events happening in adjoining rooms. I won’t go into this controversy here but this subject has fascinated me since the a was a child and now I have more information from learning about what the esoteric spiritual traditions of the east have to say.

The Tibetan Book of the dead outlines 8 stages of death where the vision of the blissful and clear white light is the last. These stage are what I would like to introduce readers to today. In the Tibetan tradition many Masters have said that this life is all a preparation for death time when enlightened is the easiest to attain. This is a huge reversal of perspective for most westerners where death is something often feared and thought about in terms of struggle, pain and suffering. What if the time of death was a time of beauty, transcendence and immeasurable bliss? What if we have lived hundreds if not thousands of times before and have never gotten our death ‘right’ and we keep having the chance to transcend time and time again but fail? This is the Buddhist perspective. And the time of death is extremely sacred and valuable.

Buddhist also reflect on these three things to help motivate them not to procrastinate on their death-time training:

The eight stages of death are the absorption of layers of consciousness down into the clear white light and are known as Dissolutions. Like a wave dying down back into the ocean. Or peeling layers of an onion. The first four dissolutions are associated with the four elements of earth, water, fire and air. The last four are inner dissolutions associated with ever increasing subtleties of consciousness.  They are all accompanied with different visions known as ‘secret signs” but hopefully won’t be secret for much longer. In the Highest Yoga Tantra practices I mentioned early all these stages are memorised and visualised daily as a form of preparation and practice for the time of death. Going through these stages also helps to master the time of death and be able to consciously choose to be reborn to continue to help all sentient beings as in the Mahayana teachings of a Bodhisattva. Also visualising going through the death process while you are alive helps to shed worldly concerns, reveal the foundation of clear light at the core of your being and arise from meditation ‘reborn’ as a being of pure light and love (Bodhisattva) and not of flesh.

The Outer Dissolution: the Senses and the Elements 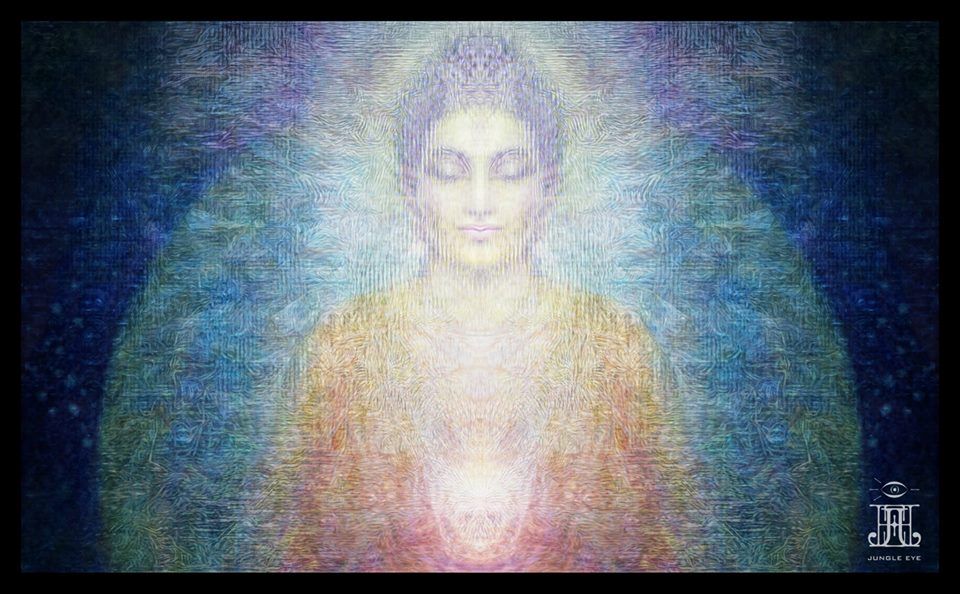 Our body begins to lose all its strength. We are drained of any energy. We cannot get up, stay upright, or hold anything. We can no longer support our head. We feel as though we are falling, sinking underground, or crushed underneath a great weight. We feel heavy and uncomfortable in any position. We may ask to be pulled up, to have the pillows made higher, or for the bed-covers to be taken off. Our complexion fades and a pallor sets in. Our cheeks sink, and dark stains appear on our teeth. It becomes harder to open and close our eyes. As the aggregate of form is dissolving, we become weak and frail. Our mind is agitated and delirious but then sinks into drowsiness. These are the signs that the earth element is withdrawing into the water element. The “secret sign” that appears in the mind is that of a shimmering mirage.

We begin to lose control of our bodily fluids. Our nose begins to run and we dribble. There can be a discharge from the eyes and maybe we become incontinent. We cannot move our tongue. Our eyes become dry in their sockets. Our lips are drawn and bloodless and our mouth and throat sticky and clogged. The nostrils cave in and we become very thirsty. We tremble and twitch. The smell of death begins to hang over us. As the aggregate of feeling is dissolving, bodily sensations dwindle, alternating between pain and pleasure, hot and cold. Our mind becomes hazy, frustrated, irritable and nervous. Some sources say that we feel as if we were drowning in an ocean or being swept away by a huge river. The water element is dissolving into fire, which is taking over in its ability to support consciousness. The secret sign is a vision of a haze with swirling wisps of smoke.

Our mouth and nose dry up completely. All the warmth of our body begins to seep away, usually from the feet and hands towards the heart. Our breath is cold as it passes through our mouth and nose. No longer can we drink or digest anything. The aggregate of perception is dissolving, and our mind swings alternately between clarity and confusion. We cannot remember the names of our family or friends, or even recognize who they are. It becomes more and more difficult to perceive anything outside of us as sound and sight are confused. Kalu Rinpoche writes, “For the dying individual, the inner experience is of being consumed in a flame, being in the middle of a roaring blaze or perhaps the whole world being consumed in a holocaust of fire.” The fire element is dissolving into air, and becoming less able to function as a base for consciousness, while the ability of the air element to do so is more apparent. So the secret sign is of shimmering red sparks dancing above an open fire, like fireflies.

It becomes harder and harder to breathe. The air seems to be escaping through our throat. We begin to rasp and pant. Our inbreaths become short and laboured and our outbreaths become longer. Our eyes roll upward and we are totally immobile. As the aggregate of intellect is dissolving, the mind becomes bewildered, unaware of the outside world. Everything becomes a blur. Our last feeling of contact with our physical environment is slipping away. We begin to hallucinate and have visions. If there has been a lot of negativity in our lives we may see terrifying forms. Haunting and dreadful moments of our lives are replayed and we may even try to cry out in terror. If we have led lives of kindness and compassion, we may experience blissful, heavenly visions, and meet loving friends or enlightened beings. For those who have led good lives, there is peace in death instead of fear. Kalu Rinpoche writes: “The internal experience for the dying individual is of a great wind sweeping away the entire world, including the dying person, an incredible maelstrom of wind, consuming the whole universe. What is happening is that the air element is dissolving into consciousness. The winds have all united in the “life supporting wind” in the heart. So the secret sign is described as a vision of a flaming torch or lamp, with a red glow. At this point blood gathers and enters the “Channel of Life” in the centre of our heart. Three drops of blood collect, one after the other, causing three long final outbreaths. Then, suddenly, our breathing ceases.

Just a slight warmth remains at our heart. All vital signs are gone, and this is the point where in a modern clinical situation we would be certified as “dead”. But Tibetan masters talk of an internal process that still continues. The time between the end of the breathing and the cessation of “inner respiration” is said to be about twenty minutes. But nothing is certain, and the whole process may take place very quickly.

In the inner dissolution, where the gross and subtle thought states and emotions dissolve, four increasingly subtle levels of consciousness are to be encountered. With the disappearance of the wind that holds it there, the white essence (“white and blissful”) inherited from our father descends from the crown of our head through the central channel towards the heart. As an outer sign, there is an experience of whiteness, like a “pure sky struck by moonlight.” As an inner sign, our awareness becomes extremely clear, and all the thought states resulting from anger, thirty-three of them in all, come to an end. This phase is known as “Appearance”.

Then our mother’s essence (“red and hot”) begins to rise through our central channel from just below the navel. The outer sign is an experience of redness, like a sun shining in a pure sky. As an inner sign, there arises a great experience of bliss, as all the thought states associated with desire, forty in all, cease to function. This stage is known as “Increase”.

When the red and white essences meet at the heart, consciousness is enclosed between them. As an outer sign, we experience blackness, like an empty sky shrouded in utter darkness. The inner experience is of a state of mind free of thoughts. The seven thought states resulting from ignorance and delusion are brought to an end. This is known as “Full Attainment”.

Then, as we become slightly conscious again, the Ground Luminosity dawns, like an immaculate sky, free of clouds, fog or mist. It is sometimes called “the mind of clear light of death”. His Holiness the Dalai Lama says: “This consciousness is the innermost subtle mind. We call it the buddha nature, the real source of all consciousness. The continuum of this mind lasts even through Buddhahood.”

Recognising this last stage of clear light of death as your True Self and giving up all attachment to a body is the key to enlightenment at the time of death. This clear light is present right now, it is the very root of existence. As Padmasambhava says in the Tibetan Book of the dead:

Stages of Death Extract from: The Tibetan Book of Living and Dying